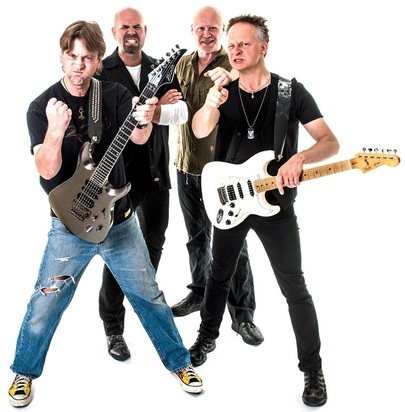 It’s not always in a bar that musicians stumble upon each other. Let’s go back to Sweden and the year 1976 for an example. Peter Karlsson and Thomas Drevin are playing miniature golf. When Karlsson’s ball gets off the course, Drevin throws it back, thereby injuring Karlsson’s hand. A conversation starts, first about golf but quickly about another passion they share: metal music.

Three years later 220 Volt was founded in Östersund with – besides Karlsson and Drevin – Christer   Åsell on vocals, Pelle Hansson on drums and a bass player who was replaced by Tommy Hellström within weeks. In April 1979 they played live for the first time at a school dance party. More school dances followed, but it quickly became clear that Hellström wasn’t the right bass player and in 1980 his place was taken by the then 14 years old Mike ‘Larsson’ Krusenberg. More and more gigs followed and on June 4, 1980 they played at the Östersund Gamla Theatre. An important gig for the guys, as this one was broadcast on the radio.

Early 1982 another line-up change took place with Peter Hermansson taking over the drum sticks from Pelle Hansson. It was this five piece that entered the studio to record a first demo. This attracted the attention of Guntans Records, that sponsored the recording of a second demo, of which the songs “Prisoner Of War” and “Sauron” landed on the band’s debut single, released in November 1982.

As Europe was scoring high in the charts at the time, every major label was searching for the next sensation and so 220 Volt got a deal from CBS, that released the band’s first three albums: “220 Volt” (1983), “Power Games” (1984) and “Mind Over Muscle” (1985). After that the band was put on ice for a while, because four of the five band members (except for guitarist Peter Olander) had to fulfil their military service.

Having issued a couple of compilations to fill the gap, the band finally released their masterpiece with “Eye To Eye” in 1988. Produced by Max Norman, this album sounded less heavy metal and much more melodic rock than its three predecessors. Think of Europe’s “The Final Countdown” or TNT’s “Intuition” and you’ll get the picture. Among the tracks on offer is one of my all-time favourite power ballads, “Love Is All You Need”, but tracks like the opening song “The Harder They Come”, “Beat Of A Heart”, “Dangerous” and “On The Other Side” are all worth checking out as well.

At the beginning of the 90s, 220 Volt called it quits, but some of the band members went on under the name of Voltergeist. In 1997 an album with previously unreleased 220 Volt material was released, called “Lethal Illusion”. In 2002 the band returned to the scene to celebrate their 20th anniversary, playing at Sweden Rock and releasing a new album, “Volume 1”, which was limited to only 1,000 copies only. In 2005 Swedmetal released the live album “Made In Jamtland” and more recently – in 2014 – the band returned on the AOR Heaven label with a brand-new studio album, called “Walking In Starlight”.