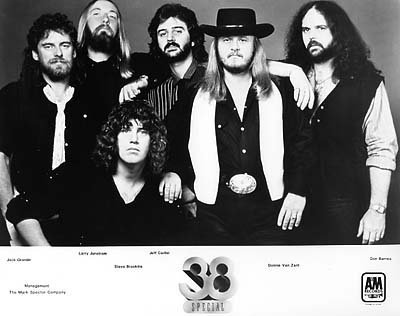 38 Special is an American southern rock band that was founded in Jacksonville (Florida) in 1975. The original line-up consisted of Donnie Van Zant (v), Don Barnes (v, g), Jeff Carlisi (g), Ken Lyons (b), Jack Grondin (d, p) and Steve Brookins (d, p). With two vocalists, two guitar players and two drummers in the line-up, it’s obvious that all the potential was (and still is) there to deliver. While the first two studio albums can be described as pure southern rock, elements of AOR were creeping in from album #3 onwards. With the title track of that album, called “Rockin’ Into The Night”, the band scored in the Billboard Hot 100 for the first time, peaking at #43.

Which brings us to Rock Report's choice: 1983’s “Tour De Force”. Although its two predecessors and its successor all scored a little higher in the American charts, this sixth studio album was without a doubt 38 Special’s ‘tour de force’. Ken Lyons was no longer part of the band then, as he was already replaced by newcomer Larry Junstrom before the recording of the band’s third album, the aforementioned “Rockin’ Into The Night”. Junstrom was an important addition to the line-up. Not only did he co-write 6 out of the 9 songs on “Tour De Force”, he also got credtis as co-producer next to Don Barnes. The producer himself was no one else than Rodney Mills, who had worked and would go on to work with a lot of southern rock bands at the time, such as The Atlanta Rhythm Section, Lynyrd Skynyrd and Outlaws. “Tour De Force” peaked at #22 on the Billboard Hot 200, was certified platinum in the US (gold in Canada) and spawned two hit singles: “If I’d Been The One” (#19) and “Back Where You Belong” (#20).

In 1984 the band scored another hit with “Teacher, Teacher” (#25), featured on the soundtrack of the film “Teachers”, a mix of comedy and drama, starring Nick Nolte, JoBeth Williams, Ralph Macchio and Judd Hirsch. “Strength In Numbers”, the last in the row of 38 Special’s four successful studio albums, appeared in 1986. Spawning another two hit singles with “Like No Other Night” (#14) and “Somebody Like You” (#48), it was good for a gold certification by the RIAA. More albums followed, but they didn’t score that well anymore, apart from the compilation “Flashback – The Best Of 38 Special” (1987), that peaked on #35 in the Billboard Hot 200 and was certified platinum.