THE BURNS SISTERS [US] - AOR 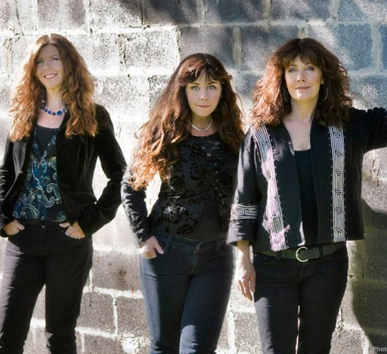 Coming from a family of twelve siblings, the sisters Marie, Jeannie and Annie Burns started singing together in New York in 1978. Two years later the trio was joined by two more sisters, Teresa and Sheila. The quintet kept working together during the eighties. Halfway that decade they got signed by Columbia Records, for which they recorded two AOR albums – “The Burns Sisters Band” in 1986 and “Endangered Species” (as The Burns Sisters) in 1989 – before losing the record deal and subsequently splitting up for a few years. In 1992 they reunited and released an independent album, called “Songs Of The Heart”, after which Teresa and Sheila left the band. The trio of Marie, Jeannie and Annie carried on and eventually got signed by Rounder/Philo, for which they recorded another four studio albums, all in a more country and folk vein. Up to now Marie and Annie (Jeannie called it quits in 2013) are still active as The Burns Sisters. The latest album they released as a duo was this year’s “Looking Back: Our American Irish Souls” (Sisters Music Records, 2015).

For us, AOR fans, only the first two albums (both recorded for Columbia Records) of the sisters are of interest. “The Burns Sisters Band” was released in 1986 and spawned two singles: “I Wonder Who’s Out Tonight” (words: Marie Burns / music: Ron Riddle) and “Listen To The Beat Of A Heart” (words: Sheila Burns / music: Ron Riddle). While the former was more of a dance/new wave song, the latter was pure AOR and managed to reach #23 on the Billboard Adult Contemporary chart. The album itself was produced by Richard Gottehrer, known for handling the debut albums of both Blondie and The Go-Go’s.  For a follow-up album, the sisters invited the team of Bob Marlette and David Kershenbaum. At the time the former was known for producing Andy Fraser’s “Fine, Fine Line”, while the latter was known from his work for Joe Jackson, Tracy Chapman and Duran Duran a.o. “Endangered Species” – released under the shortened moniker of The Burns Sisters – sounded heavier than the sisters’ debut and is a very recommendable album with many great songs, such as “The King Is Going To Fall”, “Remember Me”, “Greenlight” and “Answers”. When Columbia changed their management team shortly after the album’s release, many acts were dropped, including The Burns Sisters. It might be difficult to find a copy of “Endangered Species”, but it’s certainly worth chasing for.