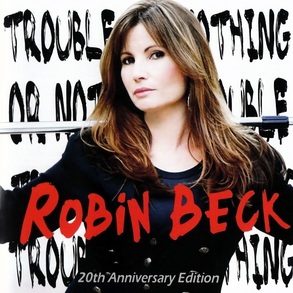 ROBIN BECK - Trouble Or Nothing - Her Majesty's Music Room/Bob Media, 2009

Of all seven studio albums Robin Beck (the beautiful wife of House Of Lords' James Christian) has released so far, her second one  - "Trouble Or Nothin" - is still regarded as her best. So, it doesn't come as a surprise that she's celebrating the 20th anniversary of that album with the release of a re-recorded version of it, featuring no less than four bonus tracks.
Brooklyn, NY born Robin Beck started her career as backing vocalist before she released her solo debut album, "Sweet Talk", in 1979. That album didn't do much, but ten years later she scored an immense hit with "First Time", which was actually a spin-off of a Coca-Cola commercial. When another single was in demand, producer Desmond Child and songwriter Diane Warren were called in and they came up with the equally impressive "Save Up All Your Tears". Although this second single didn't climb as high in the charts as its predecessor, it was time to think about the recording of a full-length album. Leaving nothing to chance, the best songwriters were asked to deliver quality material. Besides the aforementioned Child and Warren, renowned songwriters like Holly Knight, Paul Stanley, Alice Cooper, Tom Kelly, Billy Steinberg and Jeff Kent contributed to the songwriting. An equally impressive list of musicians were consequently asked to record the songs and Child oversaw the production. The result: an album that can be regarded as one of the best AOR/pop- rock albums ever recorded by a female artist.
Re-recorded by several House Of Lords musicians and a couple of others (such like the omnipresent Tommy Denander), provided with a new cover and enhanced with no less than four brand-new studio tracks (co-written by Beck & Denander), this 20th Anniversary Edition of "Trouble Or Nothing" is surely worthy of your attention, even though you own the original record. The new recordings (tracks 1-10 are produced by James Christian while tracks 11-14 were co-produced with Tommy Denander) sound fresh and breathe enthusiasm, from a splendid Robin as well as her backing band. The best news of all is that the four bonus tracks sound almost as impressive as the older material. Can't wait for her next full-length studio album!
Chris Lambert, February 2009