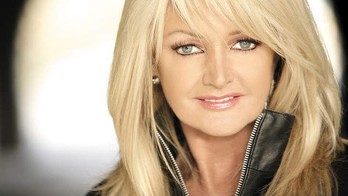 After having released four albums for RCA, Bonnie Tyler changed course and went for a rockier approach with Columbia. Having watched Meat Loaf in an episode of The Old Grey Whistle Test, she approached Jim Steinman, asking him to produce her next album. “Faster Than The Speed Of Night” was released in April 1983. Consisting mainly of reworked cover songs, this bombastic opus would become her most successful album, reaching the #1 position in the UK (certified silver) and the #4 position in the US (certified platinum). The title song, written by Jim Steinman,  became Tyler’s  biggest career hit, reaching the top position of the singles chart in countries like Australia, Canada, Ireland, New Zealand, Norway, South Africa, the UK and the US. Worldwide the song sold over 6 million copies and was certified platinum by the RIAA for shipments of over 1 million copies in the US alone. Tyler continued to work with Jim Steinman as executive producer for her sixth studio album, “Secret Dreams And Forbidden Fire” (1986), writing four songs for it, including its most successful single, “Holding Out For A Hero”, which was originally released two years earlier as part of the soundtrack to “Footloose”. The album topped the Norwegian albums chart, while peaking at #24 in the UK and only #106 in the US. The last album for Columbia was “Hide Your Heart” (1988), released in the US as “Notes From America”. For that album noteworthy songwriters like Michael Bolton, Mike Chapman, Albert Hammond, Holly Knight, Diane Warren and Desmond Child (who also produced the album) were invited, but the album didn’t score in the US and only peaked at #78 in the UK. Strange but true: the singles from “Hide Your Heart” were minor hits for Bonnie Tyler herself, but would later become major hits for other artists, including KISS (“Hide Your Heart”), Robin Beck, Cher & Freda Payne (“Save Up All Your Tears”) and Tina Turner (“The Best”).

When German producer and songwriter Dieter Bohlen proposed Bonnie Tyler a collaboration in 1991, he convinced her to return to pure pop again. So, for AOR and pop/rock fans only the three albums Bonnie Tyler recorded for Columbia are of real interest.